Ground-breaking ceremony for the new Dümmen Orange Elite in Rheinberg

Rheinberg, 29 May 2017 – With today’s ground-breaking ceremony, begins a ten month construction phase of the new Elite greenhouse at the German location in Rheinberg. The new complex of buildings provides the basis for worldwide production for all varieties of the Dümmen Orange portfolio. Therefore, it is the heart of every future production and will set a benchmark in modern hygiene standards. This investment once more proves the importance of the Rheinberg location for Breeders operating worldwide.

At 10 o'clock the invited guests and the department heads of the Rheinberg site, gathered at the edge of the construction project for the grand opening of the new Dümmen Orange Elite greenhouse. The event was opened with a short speech by Managing Director Thomas Bousart. Where he greeted the mayor Frank Tatzel and Thomas Bajorat from the municipal business promotion, both from the city of Rheinberg, Pankratz Gasseling, the representative from the Chamber of Agriculture, Nordrhein- Westfalen, Werner Wienberg, civil representative of Eversael, Edward Verbakel and Mr. Michel Winkel  the representatives of VB Greenhouse Projects BV, who were commissioned to build the new building and addressed a few words to the 30 participants. At the beginning, he quoted Georg Christoph Lichtenberg, who so aptly said "If something should get better, it has to be different" and went into the upcoming changes for the location. An important pillar of the company is the plant health, therefore Dümmen Orange has invested around 5 million euros for the construction of the new global elite location for bedding plants, perennials, cut flowers and potted plant assortments. For the construction of the new elite greenhouse, various sites were being considered, but the final choice fell upon Rheinberg. ‘’This site has a central location in Europe, a good climate, and offers qualified staff, "says Bousart. The new 10,000-square-meter world unique glasshouse is divided into, a quarantine section and an elite nursery area, which is unparalleled. ’’It is more a laboratory than a greenhouse, "says Bousart.’’We have the possibility to achieve special hygienic standards and thus ensure a backup of our valuable plant material“.

An expansion in the coming years is already planned. Further areas are available, so that the area can be expanded to about 3.5 ha in the future. This ensures jobs and strengthens the region. The mayor of Rheinberg, Frank Tatzel is also delighted about this development. 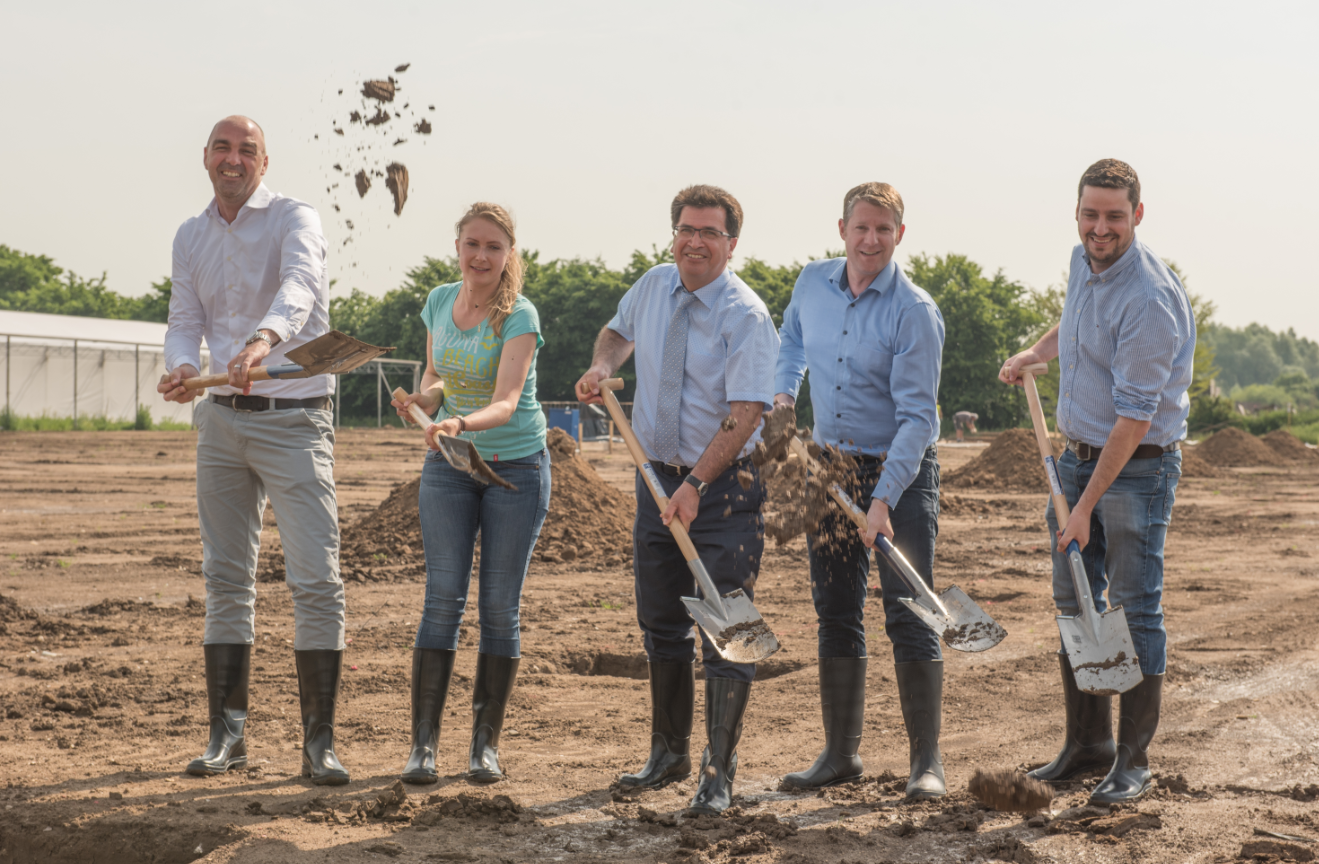 After the short speech (f.l.t.r.) Edward Verbakel, Urszula Lawecka, Frank Tatzel, Thomas Bousart and Benjamin Goepferich made the first ground-breaking for the new Elite. Afterwards, there was a relaxed round of questions and project manager Benjamin Goepferich took a look at the architect's plan.

Dümmen Orange is a leading company in the breeding and development of cut flowers, bulbs, succulents, pot plants, bedding plants and perennials. Its annual turnover is approximately 240 million EUR. The company employs more than 7,000 people worldwide. In addition to a large marketing and sales network, Dümmen Orange has a strong network of production sites. The key to Dümmen Orange’s success is a broad and extensive product range, supported by a global supply chain. The company embraces its social responsibilities and invests in the health, safety and personal development of its staff.

The partnership between Olij Breeding BV and Jan Spek Rozen was recently extended with the signing of a new contract.

Plantenkwekerij Valstar plant nursery and breeder Dümmen Orange have signed an agreement concerning the production and marketing of the pot rose assortment.